This proposal is the first one out of two which governs the launch of version 0.5 of the Panther Protocol, known as “Advanced Staking”. It defines the procedure of software components deployment and parameters of the “Advanced Staking” Program, which were discussed by the community on Panther’s Discourse forum [1] [2].

The second proposal, which is to be submitted and voted after execution of this one, will activate newly deployed software components by configuring newly and existing components of the Panther Protocol to work together.

This proposal also features an Annex, which details the different parts of the Advanced Staking process.

After extensive rounds of community testing, discussion of terms, and with tested, audited code ready to be open-sourced, Advanced Staking can now be deployed to the Ethereum Mainnet and Polygon network. You can read the specifications for it in Panther’s documentation.

Panther’s Advanced Staking is a progressive step towards the development of the core technologies surrounding the Multi Asset Shielded Pool, in particular the way UTXOs are created, managed and tracked.

Advanced Staking acts as a step to deploy and test the above capabilities by issuing staking rewards within the MASP, without users having the ability to transact within the MASP or privately withdraw rewards from the MASP in this version (the version which will allow this functionality is further referred to as the “Panther’s v1”).

Only $ZKP issued as staking rewards (unlike $ZKP users staked) are added to the MASP (as $zZKP) in this version. Its mechanisms also involve minting a “stake proof” NFT with each stake, and adding this token to the MASP (as a zNFT) that qualifies users to receive Panther Reward Points (PRPs, see the Annex) upon the v1 launch.

The following terms resulted from multiple rounds of community discussions on Discourse and other channels: 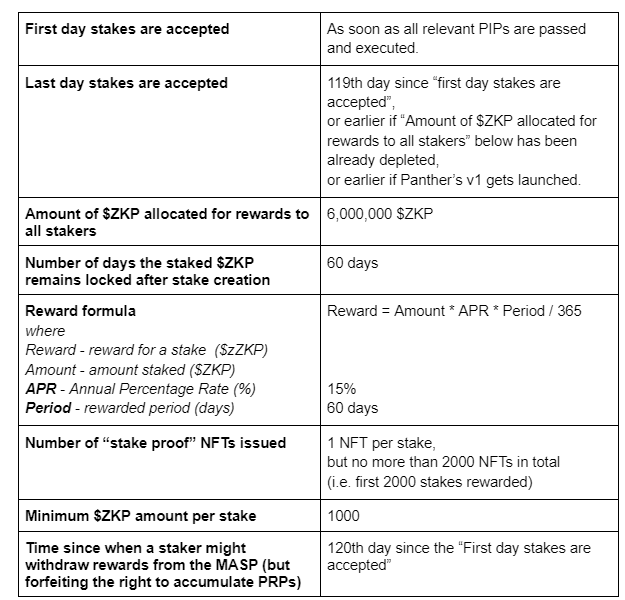 The above value indicates that there is an active program for 6 months with Stakes being accepted until 4 months from the beginning of the Staking Program.
The stakes are locked for 2 months only, which means that:

Rewards are based on the locking period. Users will instantly earn a Staking reward calculated for a 2 months period. The rewards won’t continue to accrue if the user leaves his tokens staked after 2 months so, in order to make the most of the whole staking duration, users must unstake and stake again to get the rewards for the next 2 months period.

In summary, this Staking solution is a flexible and configurable program that allows two terms of Staking within the whole duration of the program. Stakers get the same fixed % APR for both terms.

b. For subgraph components deployment - 2,000 $ZKP to each of the first 2 first deployers of the subgraph on the Hosted Service

Reimbursement shall be sourced out of the total 450M $ZKP allocated for protocol rewards.

The following actions are proposed:

Please vote to accept or reject the proposed actions detailed above.

As per the existing DAO governance structure, as the staking smart contracts are not currently issuing any rewards, you need to hold $ZKP, staked or not, on the Ethereum Mainnet or Polygon to participate in voting.

Voting power is calculated by Snapshot.org taking a snapshot of the number of ZKP tokens per holder at the block within which the proposal was created.

Annex: parts of the staking process

The following are the definitions of the multiple functions present in the Staking process. Note that specific terms and variables have been discussed by the Panther community prior to being introduced on this proposal.

Staking: Users’ stakes are securely locked in the Staking smart contracts on Ethereum Mainnet and on Polygon (same smart contracts users staked with before). Users can stake on both networks.

Unstaking: Users can unstake their principal amount from the Staking Contract after a locked time period (the two months since creation of a stake).

Staking Reward: The protocol will issue staking rewards in the form of $zZKP inside the MASP deployed on Polygon. Stakers on Mainnet will also see their rewards on Polygon even though their stakes will remain locked on Mainnet.

Reward Redemption: Users can redeem (withdraw) their $zZKP rewards from the MASP before the v1 launch by using the “Redeem” function. By doing this, they will forfeit their ability to accumulate accrued PRP rewards (see below).
Alternatively, users may wait for the launch of Panther’s v1 to use (withdraw, or transact inside the MASP) both $zZKP and entire PRP rewards.

Panther Reward Points (PRP) Rewards: To further test the protocol and the utilization of PRP, early stakers are eligible for PRP Rewards.

Panther’s smart contracts will allow conversion of PRP into $ZKP (or $zZKP) at a rate driven by the supply and demand. The rate will be initially set at “10 PRPs for 1 $ZKP”, but this value is not guaranteed to last unchanged even for a minute after the launch.

There will be two types of PRP rewards resulted from Advanced Staking:

b. Accrued PRP rewards. These are created by default as per the Privacy Reward logic of Panther Core.
The reward amount is proportional to the $zZKP amount and the time it remains shielded in the MASP. To get the accrued PRP reward a user has to spend a $zZKP UTXO inside the MASP. It means, if a user redeems/withdraws his $zZKP before the v1 launch, the one loses this type of PRP rewards.

all the points are clearly laid out on the shelves, I approve

I am excited about advanced staking going live soon! I agree on proposal

Beautiful. Wakanda would be proud of PIP-9. I’d more than happily approve.

I approve! I did read through the whole article…could someone please clarify the PRP to ZKP ratio with an example of say 100,000 ZKP staked once! Would really help clarify for everyone🙏🏻

The rewards won’t continue to accrue if the user leaves his tokens staked after 2 months so, in order to make the most of the whole staking duration, users must unstake and stake again to get the rewards for the next 2 months period.

I don’t like this part of the staking mechanism. Forcing people to remember the exact day to stake and unstake every 60 days is so tiresome.

I would gladly approve this proposal

Think of this as 2 months back to back program. This is considered based on feedback that a lot of users done want to lock for long term but have the flexibility to stake again if they so wish to. However i think in the future there could be multiple kinds of staking program - short term, long term.

I liked the whole proposal, I will vote to be approved.

All PIP-9 terms look good. Will be pleased to participate

Great Proposal, everything is clear !
I vote in favor to launch advanced staking as described above.

ICYMI; PIP-9 is live on Snapshot.

There were a few (very) minor changes made compared to the proposal above such as adding the right links for Subgraph, smart contracts, and adding the link towards the IPFS file. The right versions can be found on Panther’s GitBook and of course on Snapshot itself.

its good but minimum amount should be reduced so that everyone can get equal participating opportunity.