PIP-6 did not pass! Allow foundation to vote?

Everyone! So it seems like PIP6 did not pass the quorum as mentioned in the proposal. In all previous proposal the quorum was reached and it has been same since it was established : which is 4% of the ZKP circulating supply.
The snapshot UI might have shown 500 and that may have confused some of us. The reality is the proposal has not passed and so as per the current rule; the changes cannot be implemented.

This requires some discussion on Discourse since it was a tricky situation and the whole idea of PIP6 / Section3 is to get us out of this situation and allow community and every ZKP holder to vote.On the other hand; the good news is there could be a way out which is to allow Foundation to stake and vote to help in this situation. And seems like it can be enacted based on the already approved method described in PIP3 ( last bullet ) 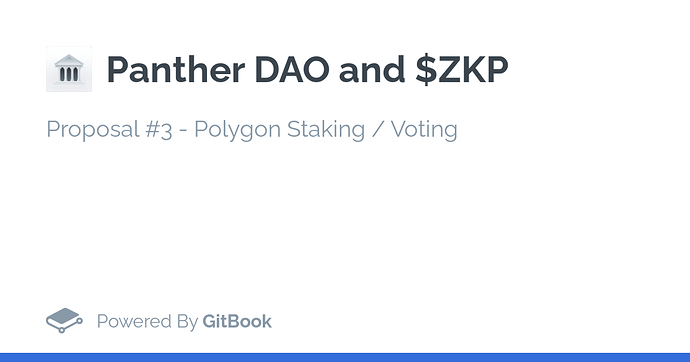 Let’s discuss this here and now! ( I agree )

I agree on letting them vote! It’s pretty obvious what the community wanted anyways…this is just an added formality! Team kindly resolve this

Thanks Carlos, if we are on the same page then my suggestion is to add one more clause to section 3 of pip 6 before putting it to vote again, instead of waiting for future proposals to do this step.

As some of you probably already noticed, PIP-6 proposal didn’t pass. Though a high percentage of the votes were in favour of the proposal, PIP-6 missed the quorum of 4% of the circulating supply which is a Proposal Acceptance Criterea of the Panther DAO.

The way forward is PIP-7. This topic can act as the foundation of the proposal. According to Proposal 3, the Foundation can stake for the sake of Governance, without earning rewards.

Proposal 3 provides solution. Foundation can vote so that voting logic will update

I agree with proposed action

This does indeed provide the way forward. Who will draft and quality check PIP-7 @Joris

Does this also mean that PIP-7 would be to change the voting criteria and then there would be a PIP-8 to re-vote for PIP-6?

The exact details will be stated on PIP-7.
Based on the community discussions we will set up a draft & keep everyone posted in the meantime.

Thanks for update. Good to see clear way forward

Can’t see any reason not to do by my side.

Let me specify the way forward.

Based on the Panther forum discussions the PIP-9 draft will emerge. I want to thank everyone here to make this possible. Together we can launch the Advanced Staking protocol.

Hi Joris so this assuming a minimum of 3 days per items is at least 9 days away?

Do proposals still need to be a 3 day minimum, or can we not just implement a supermajority - or even majority - threshold that needs to be met, to allow a vote to pass? Save wasting 3 days when ever supermajority thresholds can be met within a few hours of a proposal going live…

Thanks for your question(s) above about the 3 days voting period.

Do voting periods need to be a 3 day minimum? Right now, yes. Does the voting period has to stay this way? No, but then this has to be decided by the DAO as well. Hence a Discourse discussion, PIP from the Community, ZKP voted in etc. The voting period can be determinated on Snapshot. If the community wants to change the voting period, I suggest to propose this after PIP-9 since within a very short timeframe there will be 3 PIP’s coming up.

After PIP-9 the focus will be more on the Governance process itself as in handing over PIP templates, Governance Process documentation for DAO participants and more. Mainly because of the Snapshot Council onboarding through PIP-8.

I’m holing $ZKP but couldn’t vote. This is because I unlocked classic staking for advanced staking. There are probably many $ZKP holders like me. It seems that this part needs to be corrected. 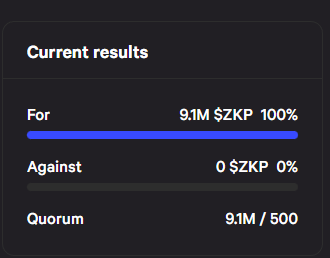 can we now, since the quorum has been reached, simultaneously start voting for PIP 8 and PIP 9?