Increasing the staking APR is a hot topic right now, with arguments for and against.

From what I can observe, a boost to the current rate boils down to this position;
Higher yield = new users buying token = this is good.

I am here to argue against this for a better compromise.
An increase in yield is good marketing material but do we really want to go down the road of attracting capital by offering high yields alone.
History has shown this to not be that good of an idea, Ponzinomics of sorts.
This requirement of new investors coming in to hopefully get the vast majority of us back to break even. Sad times indeed.
New investors will be in profit a lot sooner than any of us, will they hold as long as us or realise that sweet sweet profit that we all crave sooner than us?
The spirit of V0.5 is to get us to V1, the APR is to incentives current holders to test V0.5 in preparation for V1.
I personally never saw this as an opportunity to yield like the good old days of degen farming.

The reality is, we have a 6 million ZKP rewards pool to play with (as agreed and voted for in PIP-9). 21% of this has already been claimed a quarter way into the staking programme.
If we assume that same users restake and we have a consistent stream of novel users staking 200k ZKP a day until the end of the programme. I forecast that 50% of the total rewards would have been claimed. These are very loose numbers and could be vastly more or less than this.

But, if these number turn out to be true or similar. I suggest we use the remaining rewards towards the unrealized PRP APR. Effectively doubling your rewards. If user claim before V1 then that amount will increase further. Rewarding holders more and having them actually stick around until the bigger catalysis for price action (hopefully)
This could be used as marketing material, without favouring new users to earn more than less active long term holders who are massively down already.
If a user stakes 100,000 ZKP they will earn 2465 ZKP per stake.
If they wait till V1, staked twice and if there is 50% rewards left to give, they would of earned 9860 ZKP in the end. Getting nearly 10% back for 120 days of staking is about 30% APR which was previously mentioned. But this time you are locked in till V1 to actually earn that. Rather than just giving 30% APR (around 5% effective yield) for the next staking round.

This to me is a more streamlined, smarter way of rewarding longer term holders and possibly attracting new holders to see the project through to the end. After the 120 days you can also market this to draw eyes into the project without attracting people who are solely here to harvest profit from yields. Also, implementing this wouldn’t be as much of a time constraint on the team, rather than asking them to double rewards in the next 35 days.
This solution rewards those who are currently staked and any one new. But I would prefer to reward our long term holders than new ones at this moment. As they deserve it more. V1 is where we want to make waves. Before then is a waiting game.
Even if we only have 25% rewards left, that’s 50% boost to your current rewards. If you stake both rounds that’s 7.5% gain in 120 days of staking.

tl;dr -
Increasing rewards sounds good but might not be.
Instead we use reaming rewards towards Unrealized PRP APR.
Rewarding current stakers, new stakers and keeping user retention until V1
A potential 100% boost to those who stay till then.
Possibly easier for team to implement.

Please add your thoughts below, I would like to hear anyone who is for this and against this.

I agree that it is necessary to stimulate staking users , my option is more suitable for new staking users and yours for existing ones , I think both options have their advantages and they undoubtedly need to be implemented , it is a good idea to divide unrealized rewards between all steakers

I would like to keep V0.5 in the spirit of what it was designed to be.
Inflating the supply for new users isnt what I see V0.5 as, I would prefer that talk for V1 IMO

" Panther’s v0.5 will allow Panther’s community of contributors to test the technological primitives that will be used by the Mainnet launch of the full protocol to enable confidential DeFi. This allows Panther to start testing and utilizing key technical components of the main protocol incrementally." 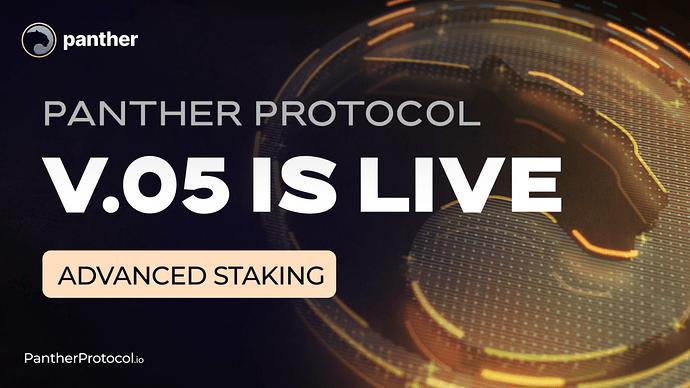 Testing seems to be the main purpose of this.

If the community wants to use V0.5 as an opportunity to attract new users. I am also happy with this as I can yield more and trade more with the new activity.
I think extra PRP rewards is better for us as a whole, a fairer compromise as new users can get on this too. They can still yield and sell their initial after 120 days but also wait for the rest of the rewards to come V1 where the price may be even more advantageous for them.

Good topic. Need to think about this.